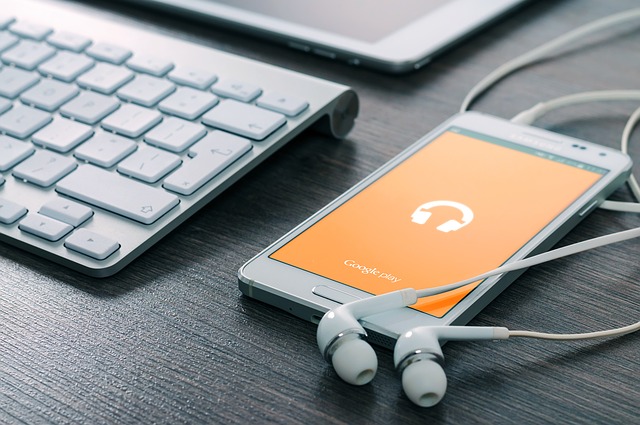 Music industry today has gone digital. No doubt about it, we are in the era of digital music. Everyone in the music business knows about this fact.

Interestingly, when people are searching for new songs even in this digital age, people are naturally bound to listen to the songs that they like i.e. the songs which appeals to them personally, this choice of selection depends on what appeals to the listener.

Such as genre of the music, blues, soul, pop music, rock music, fast music, slow music, dance hall music, reggae etc. The theme of the song would also be another factor while people select songs to listen to e.g. Christian worship songs; the choices of people vary.

And the variation of music choice of people clearly means that every quality song in this digital age has a potential to thrive, blow and get famous without a major record label.

To make it in this music business, you really need a solid strategy and a good team to work with; a label is not really what you need.

I won’t say that labels exploit your opportunities, because, not all major record labels exploit their artist. The Good Music Africa Inc. is a music promotion company you can rely on.

All these music promotion strategies are strategic in this era of digital music. These traditional music promotion companies and agencies have always been influencer in the music industry.

As said already, because these music promotion companies and agencies are strategically positioned, they are able to influence the overall songs that get heard by the mass.

You can call them the music big brothers. Irrespective of the music genre, this guys, just have the tools and resources, to manipulate their songs, until it get heard. 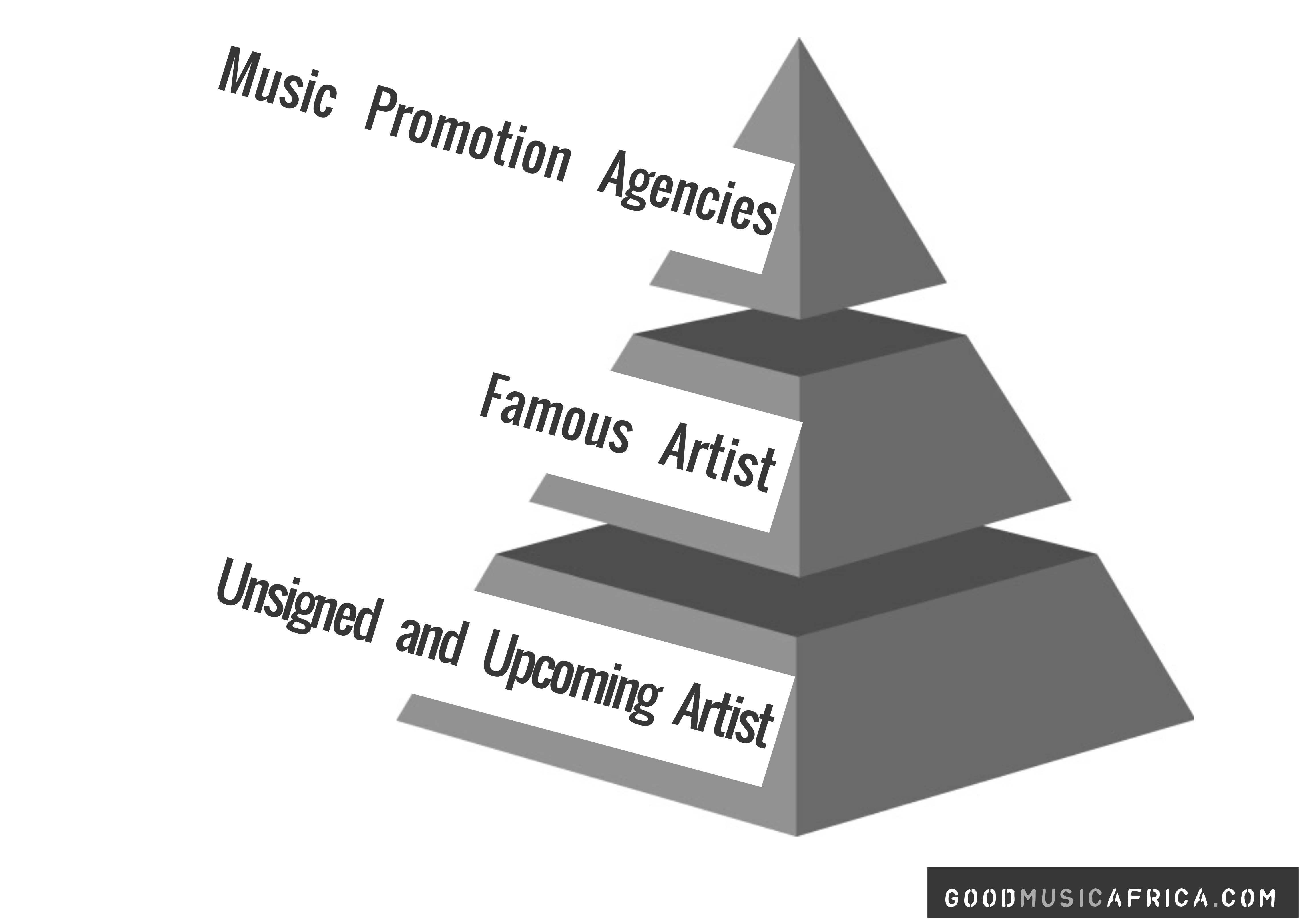 Take a look at the pyramid of influence in the music industry.

The above is the pyramid of influence in the music industry. As a matter of fact, music promotion companies still remain the reason why some songs go ahead of other songs in this digital age and era. Next to them on the ladder, are the big artist i.e. famous musicians.

Famous musicians also leverage their fame, influential power, social media influence and even money to promote their songs. They promote their songs to the radio and to even to charts; thus they get heard and remain visible and fresh in the mind of the masses. 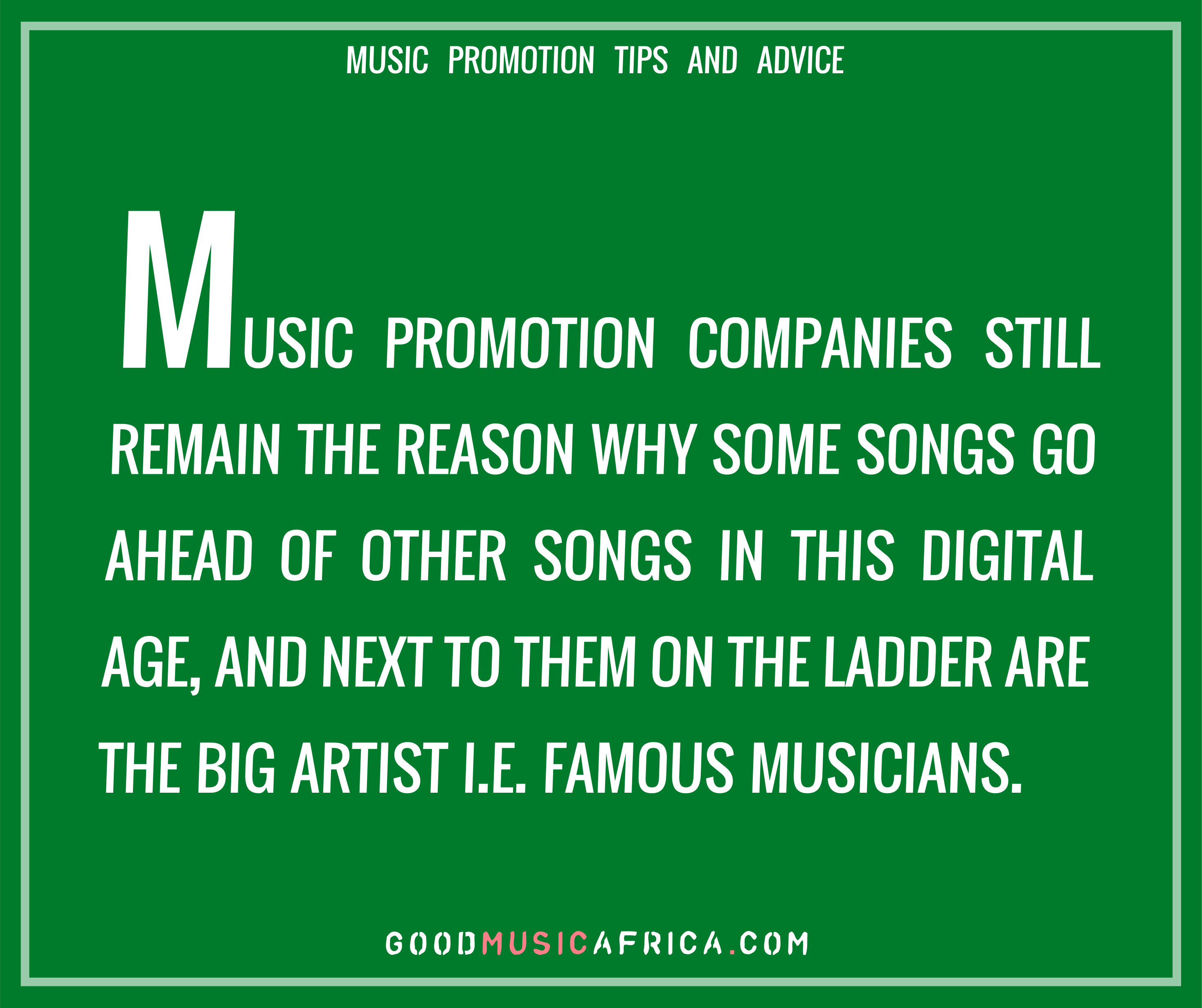 So thats is how Radio Stations and Song Charts, music promotion companies, and artist that use music promotion services are able to influence the music choice of people.

There are reasonable number of good songs are out there, which are released on daily basis. But only those that are promoted on the big platforms will be listened to, and gain influence in the music choice of people.

So the big question is this? Are you making good music? Is your music even worth a promotion? Those are the question you need to ask yourself.

To be honest with you, music is a serious business with high potentials and return of investment. It pays real big back for your time and money that you have invested into learning, production, and also promotion.

With the power of those influence i.e. radio airplay, the social media, imaging, word of mouth etc. an high quality recording definitely has an higher chance to succeed.

So how do record labels get back the money they invested back? The ROI pays back in many ways e.g. It comes back in the form of endorsement deals to the artist. And that is just one of way especially in developing countries.

I hope you have learned as much as I have enjoyed putting this article together on Influence of Music Promotion Companies and Music Promotion Website in the age of Digital Music. So how do you promote your music? Our network is growing fast.

To promote your good music in the Music-Promotion-Mix of DJ-yd-tha-great, send us a message to Contact us. We can also help you into the Music promotion mix of local DJ’s just contact us with your inquiries.